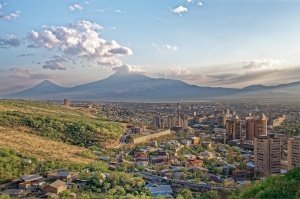 The Abu Dhabi-based clean energy group has entered into a formal agreement with an investment fund to develop 400 MW of PV capacity in Armenia, with a projected investment of up to $320 million.

Masdar and the Armenian National Interests Fund (ANIF) cemented their plans to cooperate this past weekend in Abu Dhabi by entering into a formal agreement to develop 400 MW of solar PV capacity in Armenia, following the signing of a memorandum of understanding (MoU) in July.

ANIF, a state-owned foreign direct investment vehicle, said that the deal with the United Arab Emirates-based clean energy developer will lead to “an investment of between $300 million and $320 million.”

The first part of the deal involves the construction of a 200 MW solar plant in western Armenia, using bifacial technology. However, the broader agreement also includes the development, construction, operation and maintenance of ground-mounted PV installations, floating solar arrays, and wind farms, ANIF said. The original MoU in the summer only outlined plans for 200 MW of utility-scale PV and 100 MW of floating solar.

The pace of progress is impressive, according to Masdar CEO Mohamed Jameel Al Ramahi, who described Armenia as “a fast-growing economy with an increasingly open and supportive environment for inward investment.” He said these conditions were an “important reason why we have been able to move forward in our partnership with ANIF so swiftly.”

“Our two teams have gelled as a single unit over the past few months, and I am happy to report that we have sent a highly competitive written proposal to the government of Armenia which outlines the details of the 400 MW of solar PV that we are jointly proposing,” added David Papazian, CEO of ANIF.

The companies have yet to disclose the rate at which the proposed projects will sell electricity to the grid, which is the single buyer. But the agreement is good news for Armenia, which needs to attract foreign capital. However, one drawback is that the deal downplays competition, because the generation tariff will be determined by negotiations with Armenia’s government, rather than through a competitive process such as an auction.

Last year, Spanish developer Fotowatio Renewable Ventures (FRV), which is part of Abdul Latif Jameel Energy, won a tender to build a 55 MW solar plant in Armenia. It agreed to sell the electricity to the distribution grid at a bidding price of AMD 20.11 ($0.046)/kWh.

It is expected that the tariff for Masdar’s 200 MW plant will be lower than FRV’s project. That will only become clear if the agreed rate is publicly disclosed after a deal is finalized with the Armenian government. However, Masdar did not publicly disclose the tariff for another 200 MW solar project in Jordan that it agreed to develop back in 2016.

Armenia has about 50 MW of solar capacity in operation at present, with another 250 MW approved for construction, ANIF said, noting that an additional 700 MW is planned for development. In August, the European Bank for Reconstruction and Development (EBRD) also revealed that it is seeking consultants to set up tenders for five large-scale PV projects in Armenia. The projects will range in size from 5 MW to 19.4 MW.

Armenia’s cumulative installed capacity is about 2.8 GW, spread equally across nuclear, hydro and gas power plants. However, given an anticipated increase in electricity demand, the country is now trying to exploit renewable energy sources and ease its dependence on imported fuel. The government has therefore pledged to generate 30% of its electricity from renewable energy systems by 2025, with “the potential to integrate as much as 1,000 MW of solar energy,” according to ANIF.

Armenia receives an estimated 1,720 kWh of solar energy per square meter, while many of its 200-plus rivers and lakes are also suitable surfaces for floating PV projects.