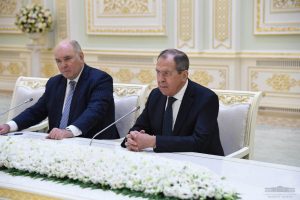 A site has been chosen for construction of Uzbekistan’s first nuclear power plant, Russia’s Foreign Minister said on May 2 during a visit to the Central Asian nation. The plant may become the first of its kind in Central Asia.

“[Uzbek President Shavkat] Mirziyoyev today expressed satisfaction with how this project was coming along and said that we have managed to come to an agreement about a site. This was an important stage in this operation,” Sergei Lavrov was reported as saying by Sputnik news website.

The choice of site appears to have considerably sped up the original schedule, which had envisioned a definitive decision being made on the location only by 2020.

Russia and Uzbekistan reached an agreement on the $11 billion nuclear power plant during President Vladimir Putin’s visit to Tashkent last October. At a ceremony during that visit, Mirziyoyev and Putin pressed a giant blue button to symbolically mark the start of survey works.

Mirziyoyev in February signed off on his government’s concept document for the development of a nuclear energy industry for 2019-2029. That roadmap casts atomic energy as an environmentally friendly and cheap source of power generation for a period of anywhere upward of 60 years. The plant is also seen as crucial to ensuring that Uzbekistan meets it target of producing 117 billion kilowatt hours of electricity per year by 2030.

That is a big leap. Energy officials have said that the objective for this year is 67.5 billion kilowatt hours.

Construction of 2.4-gigawatt plant is slated to start in the central Navoi region in 2022 and will be financed in part by preferential loans from Russia. The start of power output is scheduled for 2028.

The project is also being sold as a boon to Uzbekistan’s mission to keep a lid on its CO2 emissions, which the plant will contain by 14 million tons annually, according to officials.

As Jurabek Mirzamakhmudov, director general of Uzbekistan’s atomic agency Uzatom, told Nuclear Engineering International in a detailed interview earlier this month, the impetus behind the Navoi plant has been to reduce the country’s reliance of natural gas, which currently accounts for 85 percent of power generation.

Mirzamakhmudov indicated a far lengthier survey time than that was indicated by Lavrov, however.

“It is impossible now to talk about the specific location, as these works are ongoing,” he told Nuclear Engineering International. “It is necessary to conduct research on at least three sites. Research includes geological, hydrological, meteorological surveys and seismic, economic, infrastructure research. These works will be carried out within 1-1.5 years.”

Uzbekistan has reached out to the International Atomic Energy Agency, or IAEA, for assistance in preparing for the safety measures that will be needed to ensure the plant operates without incident. But one area of particular interest at an IAEA workshop held in Tashkent in February regarded the site.

“Two important steps early in the process are the establishment of an effective legal and regulatory framework and ensuring that potential sites are properly evaluated before being selected for a nuclear installation. The IAEA safety standards provide clear guidance in both areas, and we encourage all countries to apply them,” the agency said in a statement at the time.

There has been no public consultation of any kind conducted on the choice of site.

The plant construction agreement signed in October by Uzatom and Rosatom did, however, envision efforts to form a “positive public opinion on nuclear energy in Uzbekistan.” This suggests that the general population will not be asked for its approval, but will instead be told that the plant is an indisputable good and will perhaps even be strongly encouraged not to disagree.

Russia is on something of a nuclear spree in Central Asia. But its efforts in Kazakhstan may not proceed quite so smoothly.

When acting President Kassym-Zhomart Tokayev visited Moscow on April 3, he received a fresh offer of help from Putin to build a nuclear power plant. This idea has been batted around in Kazakhstan since the 1990s, but that talk has always been chilled by memories of the nuclear bomb tests that Soviet authorities conducted in the steppes just west of Semipalatinsk from 1949 to 1989.

Tokayev has a June presidential election to get out of the way before he can turn his hand to such contentious business. If and when he does embrace the nuclear agenda, Russia will be in prime position to take the lead, as it has done in Uzbekistan, rendering Moscow the effective guarantor of energy security for a population of more than 50 million people.